These portions of the ongoing Building Our 2nd Century project, Phase 6 & 6b, included renovation as O’Rourke Middle School and the construction of a new transportation facility. As outlined in the proposal, the middle school underwent safety & security improvements (check out video above) and classroom upgrades. Below: Photo 1: View of the interior of new bus garage bays; Video: Of new bus garage & OMS security vestibule; and Photos 2 & 3:  Exterior views of O’Rourke’s new security vestibule. 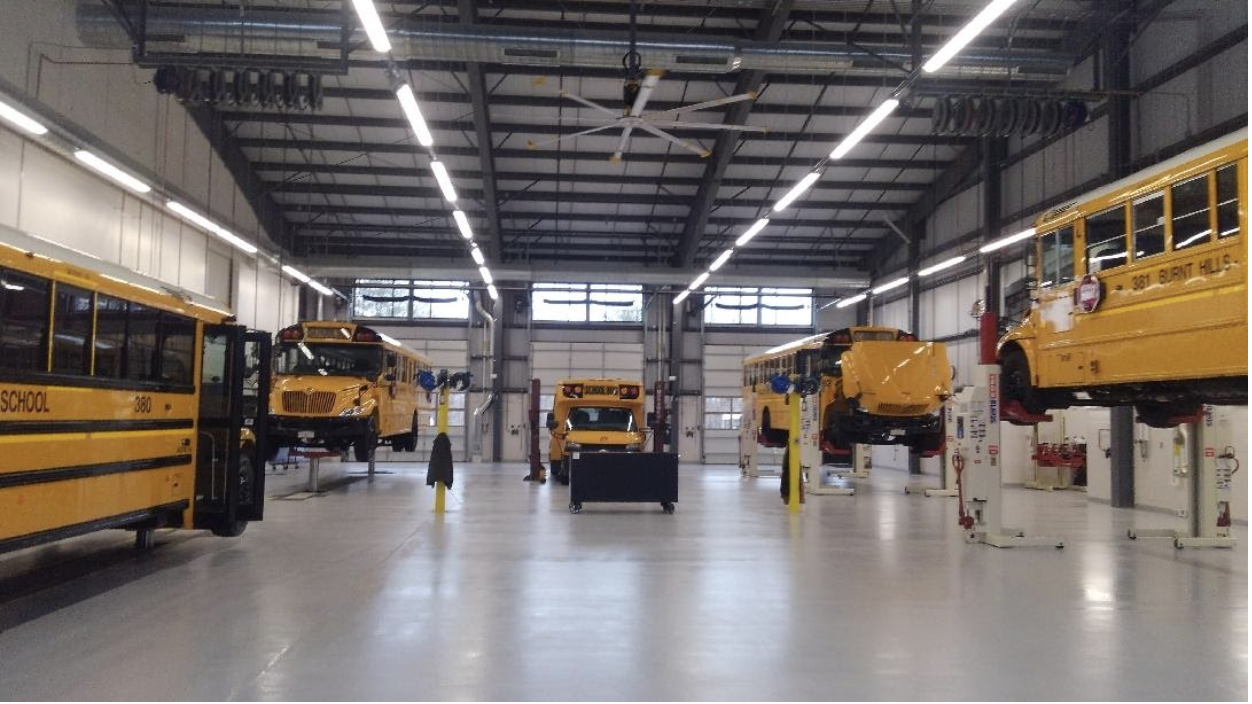 The New Transportation Facility is Up & Running

After years and years of repairing and maintaining school buses in inadequate spaces (watch video of outdated bus garage), BH-BL now has an updated, modernized transportation facility that actually has school bus bays that allow the district’s auto mechanics to raise the buses on state-of-the-art lifts and work on the undercarriage without fear of the bus hitting the ceiling. 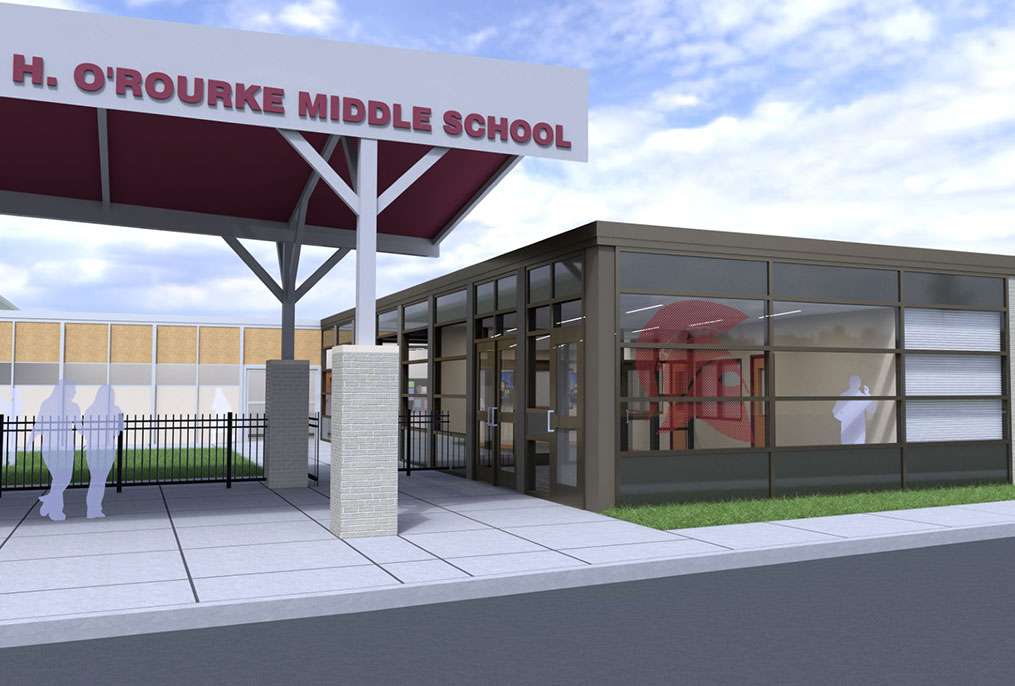 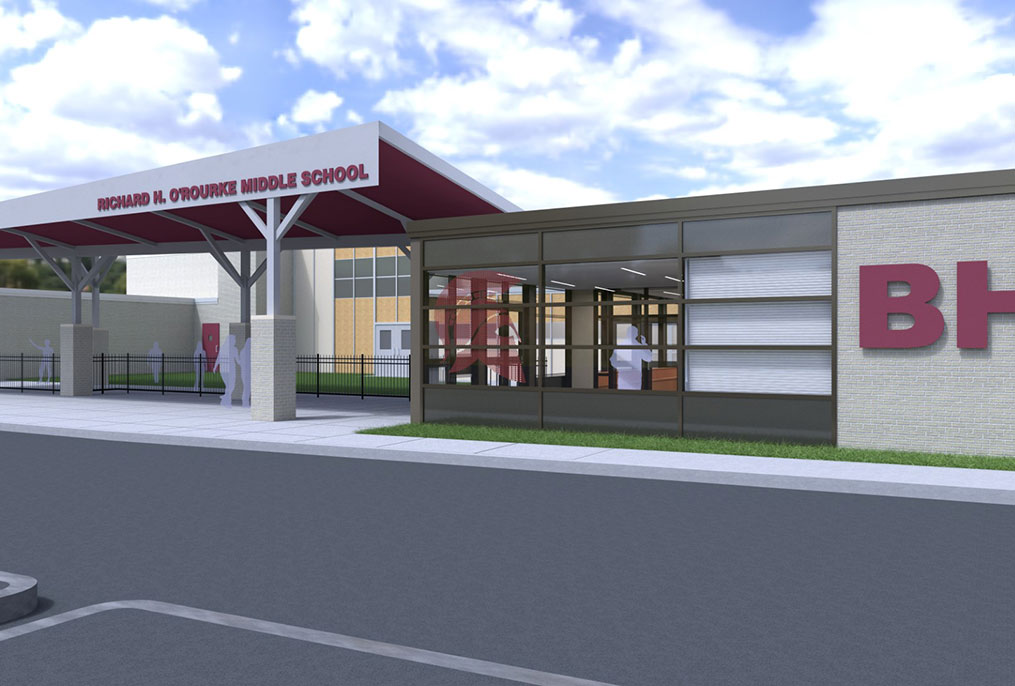 Included in the voter-approved Building Our 2nd Century II Capital Project is the renovation and upgrade of the high school’s auditorium. Originally slated to close next school year, the auditorium will now close in January 2020 and the construction timeline will be updated to allow renovation work to begin earlier than planned.

When proposing auditorium renovations to voters, it was known that the structural integrity of the ceiling needed to be addressed. (It is the original ceiling from 1954.) However, at the recent holiday concerts it became visibly apparent that the deterioration of the ceiling has escalated. The plaster is crumbling and even larger chunks of it are now falling. Therefore, out of an abundance of caution, it was determined that the best course of action is to close the auditorium and allow the architects and construction managers access to the space to begin preparing for the renovations ahead of schedule.

“I am confident that this year’s events will continue as planned and will remain a source of pride for our students and families,” says Brunson. “We will find spaces that can accommodate our events and our guests.”

Venue changes will be posted on our website and shared with the community through our School News Notifier  (SNN) email system. If you are not yet signed up for SNN, this would be a good time to do it. Before attending an event that is listed on the districtwide calendar that was printed in August 2019, please visit the district’s website, bhbl.org, for the updated location.

On Tuesday, Oct. 23, BH-BL residents overwhelming approved the Building Our 2nd Century II Capital Project vote 1369 to 603, passing rate of 69%. With 1,974 votes cast, this is the second highest voter turnout in BH-BL history. (There were 2024 voters cast for the 2013 Capital Project.) Thank you to everyone who voted. The next steps include finalizing plans and submitting them to the State Education Department for approval. The district anticipates to begin work this summer.

Polls are open Oct. 23 from 7 a.m. to 9 p.m., High School Gym
Residents are being asked to go to the polls on Tuesday, Oct. 23 to vote on a proposed $34 million capital project. The proposal would continue the improvements begun with the voter-approved 2013 capital project by remaining focused on upgrading and modernizing the district’s aging facilities to meet today’s learning needs.

If approved, the proposal would result in a one-time estimated tax levy increase of 1.62 percent which would be phased in over five years, totaling $68. Much of the plan, approximately $24 million, would be funded through state building aid. The estimated local cost would be $9.17 million.

The proposal would fund 21 projects that the Board of Education has chosen as the district’s most urgent needs based upon studies and recommendations from two Capital Project Committees.

“We have made great progress in the past five years, but we have more work to do to transform our schools into 21st-century facilities,” says Superintendent Patrick McGrath. “This proposal, roughly the same size as the 2013 project, will finish major work that has been identified as necessary to bring our buildings and classrooms up to an appropriate 21st-century level for our students.”

In many ways this proposal is a continuation of the 2013 Building Our 2nd Century referendum, or part two of two, adds McGrath.

The projects included in the Building Our 2nd Century II proposal are a continuation of improvements that began in 2013 and have been identified as the most important to ensure that our school facilities remain safe, in good working condition, and are able to meet 21st-century learning needs. They are categorized into four areas: