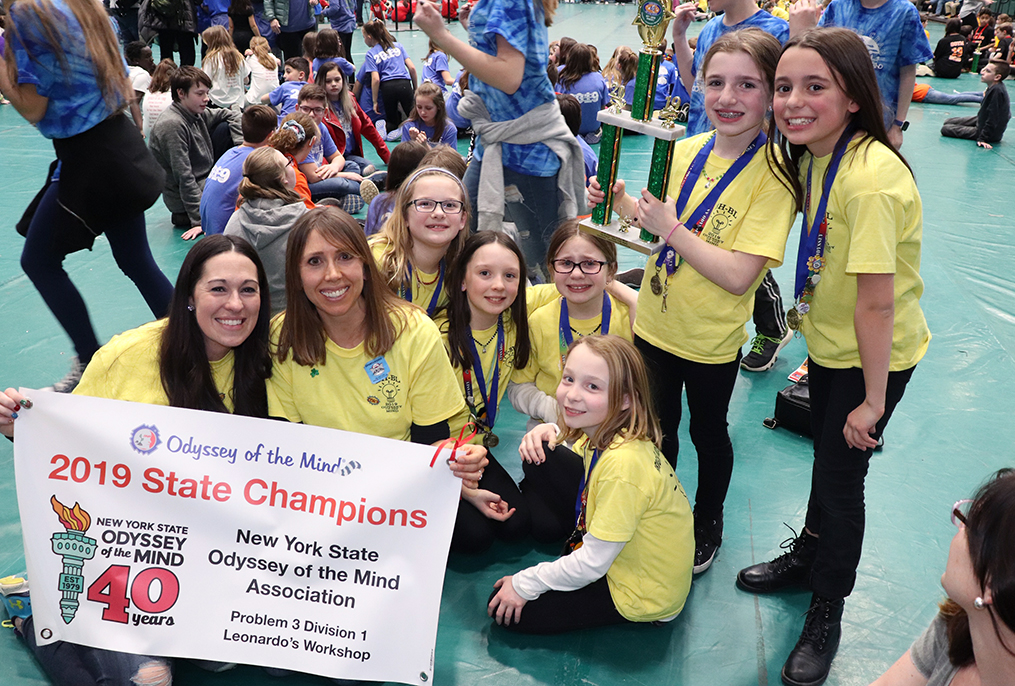 Congratulations to the Charlton Heights Elementary School’s Odyssey of the Mind team for winning  a state championship at the NYS Odyssey of Mind tournament in Binghamton, NY on Saturday, March 23. This win advances the team to the World Finals at Michigan State University from May 22 to 25. The students  will compete against teams from  across the U.S. as well as 25 countries.

Odyssey of the Mind is where engineering meets theatre and the arts, and students are challenged to think creatively and work together as a team.

The CHES team competed in the Leonardo’s Workshop problem that required students to create and present a performance that tells an original story about Leonardo da Vinci. The team’s solution included a robotic knight powered by hydraulics and two jaw-dropping replicas of Leonardo’s Mona Lisa and Lady with Ermine paintings. The students also used nearly 400 squares of fabric to sew  a quilt of the Mona Lisa. They also make a replica of Lady with Ermine out of thousands of beans. In the team’s 8-minute performance that earned top honor in the state, the students incorporated song, dance, and the witty dialogue of a painting that snapped to life.

Odyssey of the Mind is an international, creative, problem-solving competition. Students learn critical-thinking and problem-solving skills, as well as the value of teamwork by working together throughout the school year to solving a long-term problem. Thousands of teams throughout the U.S. and 25 countries participate in the program.