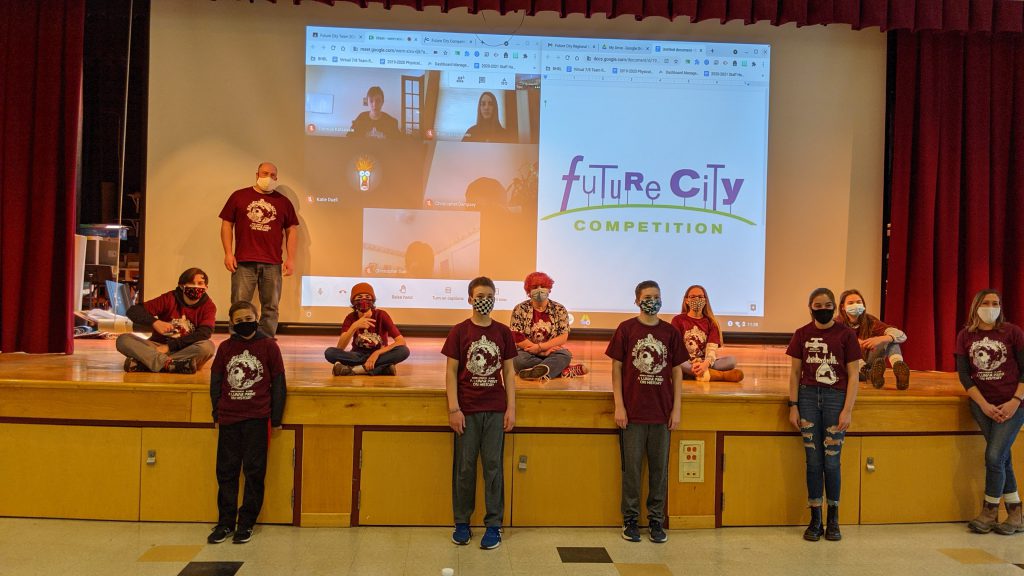 A huge shout out is in order, once again, for the O’Rourke Middle School Future City team for winning the Regional Champions title with its Spartemis City. This win now qualifies the team to compete in the National Competition. There were more than 17 teams and 150 students from around upstate NY, including teams from the Syracuse City Schools, Guilderland, Shenendehowa, and North Colonie School Districts, participating in the Regional Competition.

“I can’t believe these kids did it AGAIN this year,” exclaims O’Rourke Middle School teacher and Future City co-advisor Katie Duell. “They so deserve the title of Regional Champions. They are an extremely self-motivated group of students. But, then again, they had to be this year with the entire competition being virtual.”

The 2021 Challenge was titled “Living on the Moon” in celebration of the 20th anniversary of Future City in this region. The deliverables that students completed included a Project Plan; a 1,500 word research essay; 3D models of various individual sections of the city; a seven-minute recorded video presentation about the city; and a Q&A session via Zoom to converse with judges.

“It was such a challenging year to participate in Future City,” adds Duell.  “We are just so incredibly impressed with the resilience and perseverance these students exhibited.”

Students began working in early October via Google Meets with their mentors and teachers, and were able to host a few a in-person, but socially distanced,  meetings  in January. The students also attended a Zoom webinar with an NASA research scientist, Dr. Timothy Livengood, and they also invited local astrophysicist, Mr. Steven Spiewak (a BH-BL grad), to a Google Meet where the kids were able to ask him lots of questions. He was an outstanding resource, giving students excellent critique on their ideas while also proposing some neat ideas as students researched how to use lunar resources in their city, Spartemis City, explains Duell.

The National Competition begins Saturday, March 6, where the students will participate in three Q&A sessions with various panels of engineer judges from around the country. Good luck, Spartans!