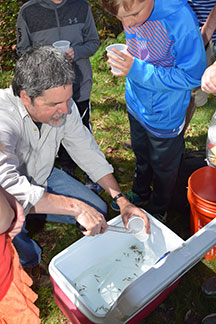 Stevens students know that if their fifth-grade teacher is Mr. Somoza they’ll be raising salmon in the classroom–and they couldn’t be more thrilled!

“It’s a Somoza tradition,” explains one student who was excited to be a part of a project that generates so much attention and is focused on the environment.

This tradition began 14 years ago when Somoza decided to get his classes involved in a raise and release program to help repopulate local streams. But, in reality, everything related to this project really started more than 150 years ago.

“When colonists first came to the Northeast many of the streams and rivers were full of Atlantic salmon. By 1850, almost all of the salmon had been killed off due to the construction of dams (which blocked their migratory paths), logging along rivers (causing erosion which buried and suffocated salmon eggs in the river bottoms), and pollution,” explains Somoza. “A program called Adopt-a-Salmon-Family was established by the United States Fish and Wildlife Service to try to bring back the Atlantic salmon and teach kids about conservation. Our program at Stevens is part of this larger effort.”

There’s so much more to this program, too. The 5-month-long project requires students to incorporate social studies, math, and science skills to complete the work.

To raise Atlantic salmon in the classroom an incubator is required. The incubator is a 30-gallon aquarium with a high-tech chiller to keep the water around 40 degrees. The students get the salmon eggs in January from the Adirondack Hatchery near Saranac Lake and they transfer them to a cold-water tank wrapped in insulation with a filter circulating clean water. The students keep a log and monitor the temperature of the water to ensure the safety of the eggs.

In March the eggs hatch. Somoza relies on a document camera to view the salmon hatching and the kids record their observations of the hatch. The baby salmon are only about 1 centimeter long and are transparent. Using the magnification feature on the document camera, the students are able to look right through the fish and even view the two chambers of a salmon’s heart and count beats per minute.

Throughout the spring months, Somoza and his students keep watch the salmon as they develop from eyed eggs to alevin, to fry, to parr. When the fish reach the parr stage the students know that it’s time to release them into Hans Creek, which is stream that flows into Great Sacandaga Lake.

With the help of Trout Unlimited and the cooperation of The Department of Environmental Conservation and the Adirondack Hatchery, this program allows Somoza to teach his students about this species of fish and bring populations of it back to local streams.

In May, Somoza’s class met up with a third-grade class from Saratoga Springs (his wife Pam Somoza’s class) that also participated in the program. Pam Somoza has been raising salmon with her students for about four years. The students got together to release the fish, as well as conduct water quality tests, collect samples of aquatic insects, and record observations.

Throughout the years, Somoza and BH-BL students have raised and released nearly 3,000 salmon allowing locals to catch mature salmon on the stream.

“My students and I know these are our salmon because we are the only ones who have stocked salmon in this stream–the DEC only stocks the stream with trout,” says Somoza.