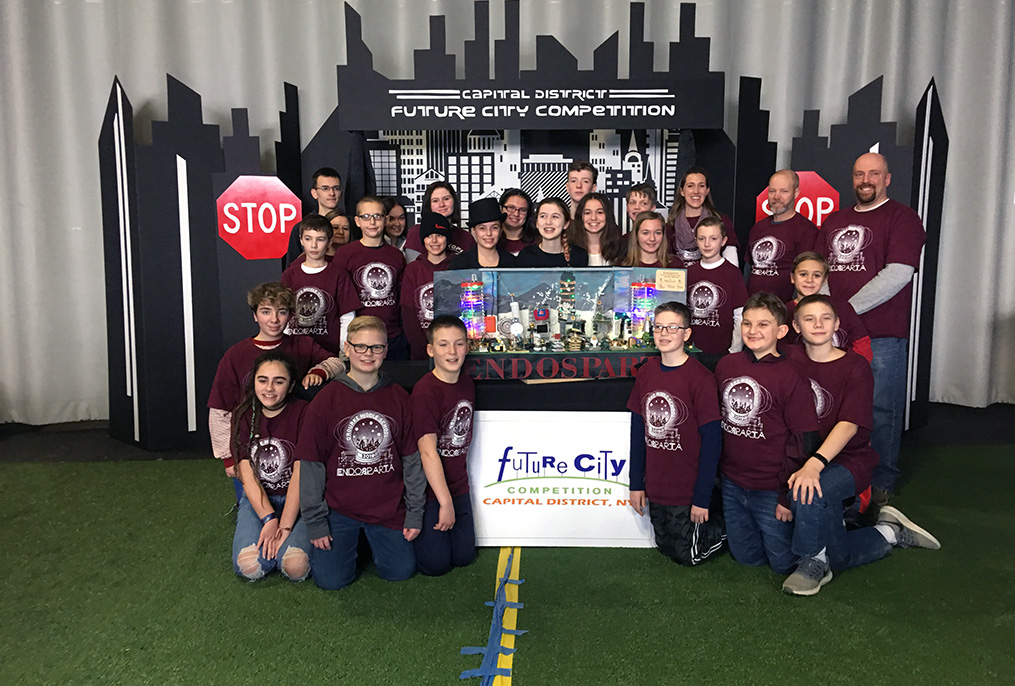 It was another outstanding competition for O’Rourke Middle School’s Future City team who took first place for the second year in a row at the prestigious Regional Future City Competition held Saturday, Jan. 12 at The Armory at Sage College in Albany.

This year’s competition required the teams to plan, design, build, write, and present a resilient city to judges. O’Rourke’s Future City team built EndoSparta, a city with an electrical grid that was designed to be able to withstand and quickly recover from a natural disaster.

The students, along with middle school science teacher Katie Duell and middle school technology teacher Nick Morocco as well as Engineer mentors Erik LeClair and Jennifer Weiderhold, competed against 23 teams (about 600 students) from 16 other schools around the region. The first place win for BH-BL means the O’Rourke Middle School Future City team advances to the National competition in Washington, D.C., February 17-19, 2019.

“The students were so excited and proud to bring home the first place trophy and other awards that recognize and applaud their hard work, ingenuity, and determination, “ says BH-BL Supervisor of Science & Technology Education David Collins. “I’m tremendously impressed by the team’s level of collaboration, creativity, technical skill, and poise demonstrated when publicly presenting EndoSparta.”

O’Rourke team members along with their advisors and Engineer mentors devoted many hours to the competition, working tirelessly from September through January to complete the five requirements for the Future City competition.

“The Future City program is truly a STEAM (Science, Technology, Engineering, Arts and Math) event the incorporates nearly every element–from coding and manufacturing to researching, designing, writing, and public speaking–into the different steps of the competition,” adds Collins. “This program embodies the vision of STEAM that BH-BL continually supports and encourages, and we are proud of the incredible work the students did and wish them luck at nationals!”

Future City is a project-based learning program where students in 6th, 7th, and 8th grades imagine, research, design, and build cities of the future. The theme this year was: A Resilient City. Natural disasters— earthquakes, tornadoes, or hurricanes — pose serious threats to cities and citizens. The damage from these events can severely disrupt every aspect of life in an affected region. A resilient city adapts to challenges; it has connected systems and infrastructure in place that limit damage and help the city recover. Physical systems such as infrastructure and housing are built to withstand high winds or earthquakes, information systems such as zoning data and maps are designed to support relief efforts, and institutions such as city management or emergency response are developed to help with recovery. A resilient city ensures its residents are safe, their communities are stable and cared for, and the economy remains durable. With these pressing issues at the top of mind, middle school students had to create an electrical grid that can withstand and quickly recover from the impact of a natural disaster.