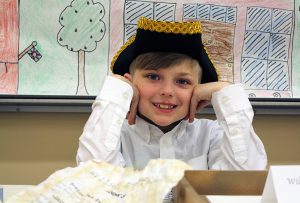 When visitors walked into the fourth-grade classrooms at Stevens Elementary School on Friday, May 17 they were instantly transported to back to 1775. It was a period when there was great unrest in the American colonies over the unfair treatment of the colonists by England’s King George III and Parliament. The Patriots were tired of this unfair treatment and revolution was in the air. But the Loyalists are still hoping that England can calm the colonies and can remain in control.

Students in Mrs. Olsen’s, Mrs. Brophy’s and Mrs. Guba/Clary’s rooms spent roughly three weeks researching and writing about town life and farm life in the American colonies in 1775. Each student picked a made-up character and a job to write about in class. At home, students collected or made artifacts and a costume to depict their character in the museum. 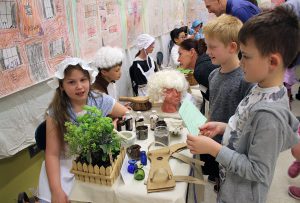 The students were more than ready, and excited, to play their parts in the school’s much-loved live history “museum.” Visitors to the museum, which included students from every grade level at Stevens as well as district administrators, parents, and grandparents, were encouraged to talk to the “colonists” and ask them about their job and whether they are a Patriot or Loyalist and why. The younger students were even given note cards to help them begin their questions. Another grade level of students conducted interviews and put together a “news story/broadcast” for the school. 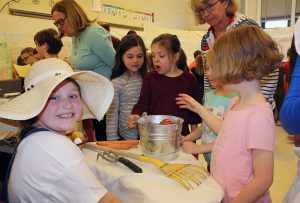 “This is a tradition that the students really look forward to,” said the mother of one fourth-grade student. “When my daughter was in second grade she began saving items that she might be able to use in the living museum when she got to fourth grade. She could hardly wait for this project.”