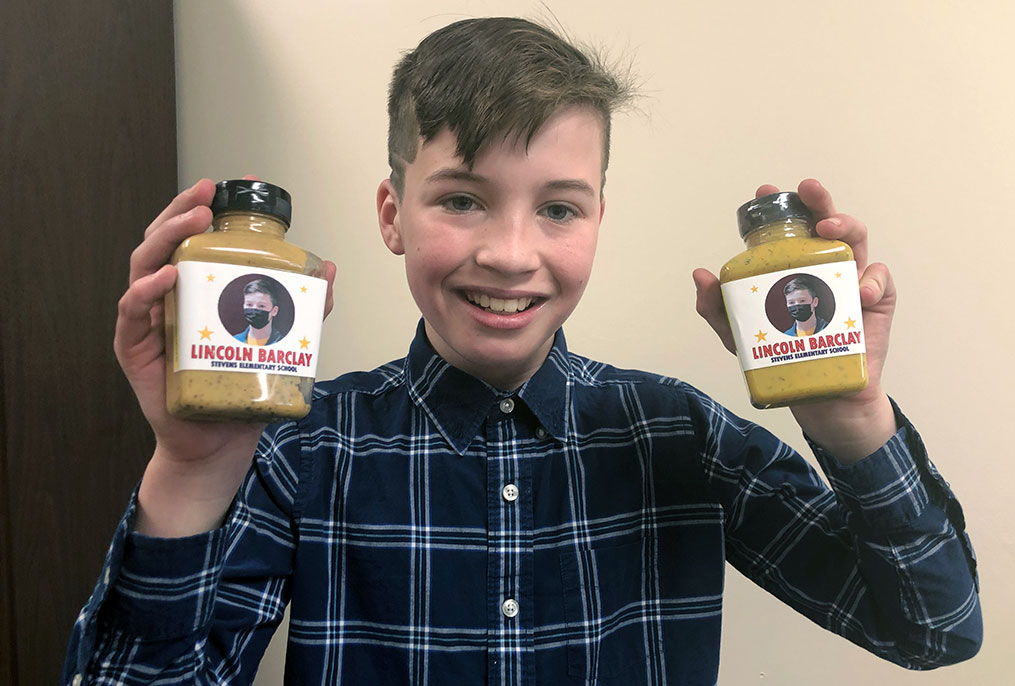 Do you remember the story about Stevens Elementary School fifth grader Lincoln Barclay whose campaign for Student Council focused on bringing mustard back to the cafeteria? (You can view the “For the Love of Mustard” story here.)

It turns out that story grew legs. It caught the attention of the curator at the National Mustard Museum in Wisconsin and piqued the interest of folks at Stadium Mustard located in Ohio. As it turns out, when you catch the attention of a mustard lover and mustard company you get …well, more mustard!

Stevens Elementary School Principal Richard Evans recently accepted two large box deliveries at school but quickly learned they were NOT for him. The boxes were actually addressed to Student Council Vice President Lincoln Barclay. It was time to call Lincoln to the Principal’s Office. 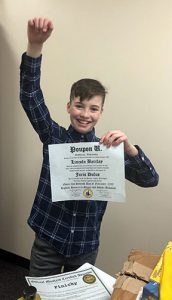 Much to Lincoln’s complete surprise, the National Museum of Mustard mailed him a huge goodie box filled with a mustard book, a mustard game, a French’s mustard hat, notebooks, postcards and even two bottles of mustard with his picture on the label. To top it off, Lincoln’s love of mustard earned him an honorary degree from Poupon University! (Apparently only those who are true mustard enthusiasts are graduates from Poupon U.)

Oh, but the story doesn’t end there. If you remember, Lincoln said he absolutely loves French’s mustard and uses 3 to 4 packets on just one hot dog. His mother even said it’s as if the hot dog is the condiment for Lincoln. Stadium Mustard, who supplies concession stands at more than 100 stadiums, 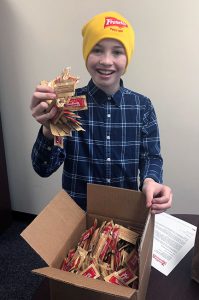 ballparks and arenas with its spicy brown mustard, wanted Lincoln to add another favorite to his list. Stadium Mustard sent Lincoln three boxes filled with mustard packets for his school. They also sent him a Stadium Mustard t-shirt and two bottles of their famous mustard to take home.

“This is so awesome–incredible really. I can’t believe this is happening,” says a super excited Lincoln as he opens his mustard boxes in amazement. When asked if he thinks he could possibly like another mustard besides French’s, he said: “Well, I like Golden Retriever dogs and I like Yellow Labrador dogs, so I don’t see why I wouldn’t like French’s AND Stadium mustard!” 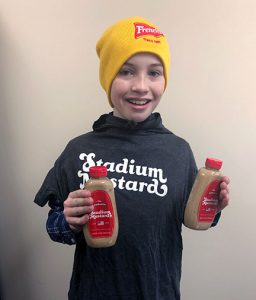 Lincoln couldn’t wait to show his peers the new mustard they get to try in the cafeteria and is hoping that hot dog day is on the school lunch menu soon.

If any manufacturers of pretzels want to get in on the fun, we know that hard and soft pretzels go REALLY well with mustard!