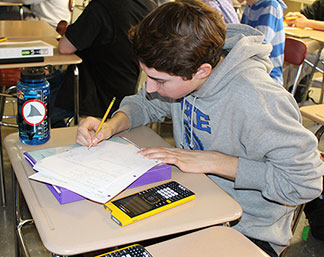 Out of more than 4,500 schools statewide only 220 schools were named 2016-17 Reward Schools, and only about 90 New York state high schools outside of New York City were honored with this recognition.

Burnt Hills-Ballston Lake High School was one of only two in the entire Capital Region (Niskayuna High School is the other) to be named a Reward School.

Additionally, BH-BL is among only 78 schools (of any level) in the state to be named a Reward School four years in a row. Most elementary and middle schools in the state were eliminated from Reward School consideration this year based upon high rates of students opting out of NYS exams.

Schools designated as Reward Schools for High Performance demonstrate a combination of high test scores and strong graduation rates, especially among students who had previously scored below proficient on state tests in elementary or middle school.

“The success of our high school students on these objective measures is a credit to the whole system–which includes our incredible faculty, staff, and administrators all the way from kindergarten through twelfth grade,” says Superintendent Patrick McGrath. “This recognition is further proof that our school system remains strong and vibrant despite the turmoil at the state and national level.”

How is a Reward School determined?

A combination of academic improvements and growth measurements over several years as well as graduation rates are used to determine Reward School status.

For example, to be identified as a Reward School, a school must:

Additionally, high schools must have graduation rates above 80 percent to be a high achieving school and above 60 percent to be a high progress school. Also the percentage of students in the school who graduate with a Regents diploma with advanced designation or a Career & Technical Endorsement (CTE) must exceed the state average. Furthermore, high schools must demonstrate that their graduation rate for students who entered the school performing below proficient in ELA or math exceeds the state average.

“It’s elite recognitions such as this that remind us just how hard our staff work on a daily basis to encourage and support academic excellence among all of our students,” adds High School Principal Tim Brunson. “Our students’ academic growth throughout the years is a true testament to their own unwavering dedication and commitment to receiving a high-quality education. It is no wonder why there are so many generations of Spartans attending our schools–and I’m proud to be a part of this district. ”